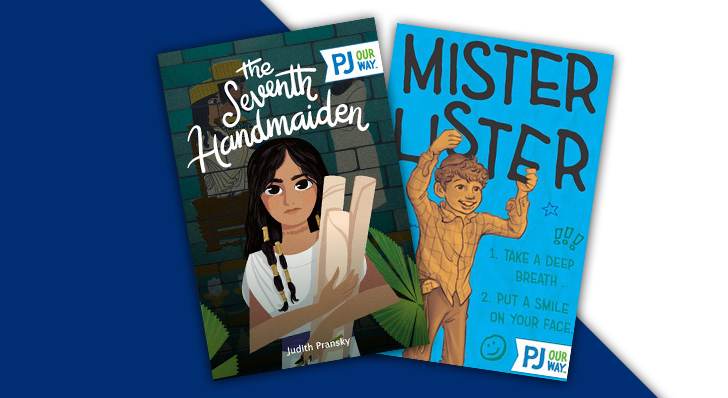 PJ Our Way kids from all over the US and Canada got the chance to ask Judith Pransky all about her book, her writing process, and more. Check out what she had to say!

Have you read The Seventh Handmaiden? Author Judith Pransky (who also wrote PJ Our Way book Mister Lister) answers kid questions in the interview below!

Q: How did you come up with the twin concept? I really thought that was smart and, also, I myself am a twin (my twin's name is Tirtzah) - though we don't look alike. - Rivka, age 11, Ohio

A: I thought of making Darya a twin because I needed to find a way for Darya to discover who she really was. If she had an identical twin, she could meet her sister and literally see herself.

Q: I was interested in where you found the names Darya and Jaleh, because my friend and her mom have the same names. - Ella, age 10, Ontario

That is so interesting that your friend and her mother have the same names as my characters! I am fascinated by the meanings of names, and I try to choose names for my characters that have specific meanings. I chose Darya and Jaleh mainly because Darya means “protector” and Jaleh means “rain.” The meanings of their names became part of the story.

Q: Could any of Esther's handmaidens read and/or write? - Hadar, age 11, New York

It would have been very unlikely for any of the other handmaidens to know how to read and write. Darya learned those skills by accident, and not even the king knew how to read and write. Esther knew how because reading and writing have always been important to Jews so they could study Torah on their own, although that was for men more than women. For other people, reading and writing was a job for some of them to do. For others, it was considered an unnecessary waste of time.

Q: What was the inspiration for this book? - Ruby, Massachusetts

A: I had been teaching sixth graders about ancient Persia and its connection to the Megillah of Esther and one line stood out for me—the line that says that each of the women who were brought to the palace to meet Achashverosh were given seven girls to serve them. I began wondering who those girls might have been and what their lives were like. That is how the main character, Darya, was born.

Q: When you wrote this book did you try to imagine yourself as a character in this story and if so, which character would it be? - Rivka

A: No, I did not try to put myself in this story. Actually, when I write, it does not feel as though I am the one creating the story. It feels like I'm watching a movie and I am writing down the action as it takes place.

Q: What inspired you to create the character of Behooz/Master Arman/Darya/etc.?

A: I'm really not sure how Behrooz was created. I was writing the scene about Parvaneh's birthday, and suddenly Behrooz showed up in the kitchen and began threatening Jaleh. Sometimes, that happens when I write. Characters just show up and start talking.

When I thought about all the servants and slaves who worked in the palace, it occurred to me that someone had to make sure none of them were a threat to the king. Master Arman was in a good position to do that, since he was the one who hired people and bought the slaves. But he needed many spies helping him since the palace was so large and so many people were involved.

Darya was not inspired by anyone in particular, just by the sentence in the Megillah that mentions the seven girls who served Queen Esther. I had been teaching sixth graders about ancient Persia and its connection to the Megillah of Esther and one line stood out for me — the line that says that each of the women who were brought to the palace to meet Achashverosh were given seven girls to serve them. I began wondering who those girls might have been and what their lives were like. That is how the main character, Darya, was born.

Q: Are there any connections in The Seventh Handmaiden to society today? - Kinneret, age 12, Quebec

That's an interesting question. As I studied the Megillah to write the novel, I noticed some connections to today and tried to incorporate them into the story. For example, it struck me that many citizens of Persia might have felt threatened when large groups of new people, like the Jews, were granted citizenship in their empire. They might have felt that the new people would take their jobs and make it harder for them to earn a living, just like some people are afraid of that today. It also occurred to me that when Mordechai reacted to Haman's evil decree by wearing mourning clothing in public right outside the palace, it was like people today who stage demonstrations in public places in order to spread the word that something wrong is happening.

A: Each of my books took a different amount of time to write. I wrote The Seventh Handmaiden while I was teaching middle school full time. I wrote it mainly during the summers, when I had free time, and I kept starting and stopping, so it took me six years to finish. However, my first Mister Lister book took only about two weeks! But all I did during those two weeks was write, and of course, Mister Lister is a short chapter book, not a full-length novel.

Q: Do you have any tips for young writers? - Hadar

My advice for young writers is that if you like to write, keep writing. Just like playing piano or shooting baskets, the more you practice, the better you become. The more you write, the more comfortable you will be setting your thoughts down on paper. And don't be afraid to show your work to people you trust. I have always found it helpful to get feedback about what I write.

The Seventh Handmaiden is available on audiobook from PJ Our Way through August 2022! Check out pjourway.org/audiobooks to find out more. Happy listening!

Want to read it! Sounds like a good one

I'm thinking about reading " The Seventh Handmaiden" is it any good?

I really liked it.

I really want to read the book now! To anyone who has read it, is it good?!

i remember that my brother got mister lister from pj library

I piked the seventh handmaiden and it was so good!!!

OMG!!!! She is my FAVOURITE author in the whole universe!!!!!! My favourite book is The Seventh Handmaiden!

PJ Our Way is available everywhere in the United States and Canada to children between the ages of 9 and 12.
My child does not qualify now but I wish to learn more. FAQS
Hang on! We're transferring you to Kid Mode Parent Mode.